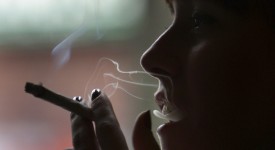 AMSTERDAM, NETHERLANDS – FEBRUARY 07: A woman smokes a cigarette of marijuana in an Amsterdam cafe on 7 February 2007, Amsterdam, Netherlands. The city council in Amsterdam has recently voted in favour of introducing a citywide ban on smoking marijuana in public in areas. A successful trial ban in the De Baarsjes district of Amsterdam has been declared a success after a reduction in anti social behaviour. (Photo by Christopher Furlong/Getty Images)